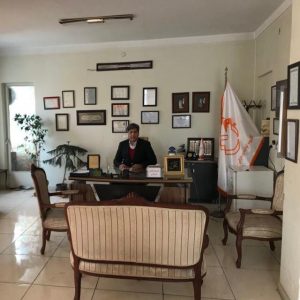 The establishment with broiler chicken unit was in Forty decade of Shamsi Hijri when the sale of industrial chicken was very difficult.

The vast majority of Iranian population were called this product a machine chicken. For the Iranian people, it took years to use this protein product simply and comfortably. Yes, it’s nearly 60 years and 4 generations since the start of this very blessed industry of my grandfather. I am proud to always be the founder of new protein products of white chicken meat. I am the first person to set up an antibiotic chicken in Iran. For this purpose, I attended in Atlanta-America Exhibition in 2006; I have achieved the tactics of cultivating this type of product. By breeding different styles of industrial chicken in local and private laboratories, I began to grow chicken with different diets, such as chicken breeding and producing protein with dry milk and sesame oil. I tried to breed chickens for children and patients with Alzheimer’s. So, in cooperation with University of Semnan, we obtained different analyzes. However, we could not produce industrial production; it is remained in the concept due to high price of the product.

This collection is based on its mission, which is innovation and creativity. Also, ethical structure of the company is based on knowledge and native abilities (for example, native workers and managers are employed in all of my companies). Hence, in the order of Supreme Leader of Islamic Revolution to use Iranian goods, I decided to restore this valuable strain (Arian race which has been forgotten after nearly two decades) to the chicken coops of Iran and dear people by participation of Jahed livestock inputs. Therefore, we studied the strain. Considering the characteristics of this strain, we found positive and negative behaviors of it. Given the country’s specific conditions and threats from political and economic imperialism of the world, it was necessary to make positive points of this strain more visible and more powerful and to remove its weaknesses by cooperating with Jahed livestock inputs (who owns this strain, which is one of the eight proprietary line owners in the world). As it is not commonly used, it is the second strain in the whole world that has not been genetically manipulated. The growth of bird is fully natural; it is formed in a perfectly natural and organic schedule. So, taste of the meat of this bird is very similar to the taste of the bird in the wild; if the readers who have emotional feelings do not feel bad, it’s exactly like the taste of hunting birds’ meat.

So, if you try to nurture these birds in mountainous areas, they will have delicious taste. In addition, since their ancestors were born in Iran and they are native, the bird is resistant to most of common diseases in the country. So there is no need to prescribe medicine; it has healthy and delicious meat like a mountain bird.

Second positive feature: if we want to look at the negative aspects of the bird, we should note that the birds do not become sick because of their resistance to indigenous diseases. It causes the weighing is reduced, it means that more consumption, less bird weighing and accumulation of more chemical residues in chicken carcasses will harm to both producer and consumer.

Third positive feature: since high prices for one-day chickens will force growers to cut the price of chickens per head due to imports from the United States and England (most threatening countries in the world), carcass weight is reduced from 2.5 kilograms to 3 kilograms to pay less for chickens per kilogram of live chicken. Therefore, consumers are usually forced to pick up high-weight chickens on shopping shelves. While one of the world’s eight farmlands is in Iran, the farm’s price, which is Arian one-day-old chicken, low-weight chickens or so-called whole-bird meat chickens are harvested. This makes it possible because the cost of Arian chicken is low due to lack of disease and lack of using medicines and antibiotics.

So, given the positive points mentioned, there is no reason to say goodbye to chicks for reason or reasons that mentioning them on this website may cause malnourishment of some of the major companies. And say hello to the chickens of the 60s and ’70s, all of which still remember the taste of those chickens, that is say hello to Arian Iranian chicken, Iranian chicks, Iranian ancestors and Iranian line. Say hello to homeland, say hello to handcuffs of workers of mother chicken farms with 1500 hectares of land. Let’s announce to the managers of this collection that we all call with certainty:

So, I signed the necessary contracts by providing full poultry chicken package consisting of three fully professional and ownership mother chicken units, one broiler chicken unit of 70,000 ownership pieces and 800,000 broiler pieces (target number) and incubation unit package of 30,000,000 pieces per year (ownership) and slaughterhouse unit package with associated conversion industries in all units to Arian race, as first unit of integration or production chain. I was honored that I am the first chicken coop in my beloved country Iran that all of my productive parts, such as my ownership and management, are at the command of my leader. I am very confident and happy; I hope that other colleagues try to leave English chicks and reconcile with Iranian Arian chicks with respect to order of the Supreme Leader.